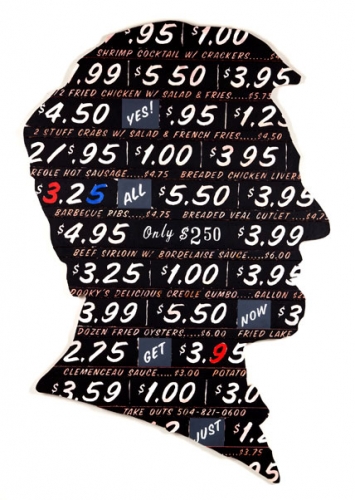 In Black Lincoln for Dooky Chase, newly acquired by the Brooklyn Museum, Skylar Fein overlays a silhouette portrait of Abraham Lincoln on a panel made to resemble an old wall menu from Dooky Chase, a well-known Creole and soul food restaurant in New Orleans. Fein’s use of the silhouette taps into a long visual tradition, other examples of which are on view in this installation. Evocative of the antebellum period and offering a graphic contrast of black and white, the silhouette lends itself to explorations of racial issues by contemporary artists such as Fein and Kara Walker. Fein’s portrait can also be considered within the context of the memorabilia that proliferated after Lincoln’s assassination in 1865, as well as in relation to the pennies featuring his profile that were initially issued in 1909, the centennial of his birth.